Share a memory
Obituary & Services
Tribute Wall
Read more about the life story of Jeanette and share your memories in the Tribute Book.

Jeanette was born February 6, 1927, in Gladstone, the daughter of Wilfred and Augusta (Stock) LeRoux. She was raised there, attending All Saints Catholic Grade School and graduating from Gladstone High School in 1945. She was married to John A. (Jack) Manning for nearly 70 years and the couple were lifelong, well-known residents of Escanaba.

Jeanette was an incredibly active woman even into her 90's.  Before fitness classes were common, she was an inaugural member of Jacki Sorensen Aerobics at the Bonifas Civic Center and continued as a regular participant for decades.  Jeanette was an avid skier, golfer, biker, bowler and with Jack had many exciting sailing adventures as the first mate on their sailboat "Cracker-Jack ''.  Although she was a small-town girl, she saw the world on the couple's travels which always included some active activities such as skiing the high terrain of the Alps, biking through the French countryside or sailing the Mediterranean off the shore of Turkey. Jeanette enjoyed life in Escanaba and the U.P. embracing the four seasons of weather, especially winter. She started skiing on homemade equipment in the 1930’s on the Gladstone bluff, and together with Jack, “Never Skipped a Season”…riding rope tows at Pine Mountain, T-bars at Cliffs Ridge on opening day in 1958, traveling to Aspen well before it was famous, visiting Vail when it was only marked by a sign on the side of the road and skiing the “Greatest Snow On Earth” in Utah year after year.

Jeanette most enjoyed her life with family and the friends which she and Jack gathered over the years. In her younger years Jeanette worked as a switchboard operator for Michigan Bell then a hearing and vision specialist for the Delta-Menominee Health Department.  As a quintessential mid-century homemaker, she remained elegant and graceful while raising a family and helping in the downtown family shoe and ski business. Cooking and entertaining remained hobbies over the years, and Jeanette enjoyed hosting gourmet dinner and wine parties aswell as bridge club events. Living in two "Goulais Addition" homes, the first built for $13,500 and the second on Park Avenue overlooking the Escanaba Country Club, allowed her to be very near her family, friends and grandchildren who would visit daily which made her so very happy.

Jeanette was a long-time member of St. Joseph and St. Patrick Parish in Escanaba.   She and her family were known for attending early Sunday mass in their ski clothes so they could drive directly to Cliff’s Ridge (now Marquette Mountain) for a family ski day. It was not uncommon for guests to ride along: friends, family or even one of the Christian Brothers from Holy Name High School who enjoyed skiing.

She was preceded in death by her sisters, Joan (Rich) Wlodarski and Joyce (Ken) Beaudoin; and her sister-in-law, Mary Manning (Tom) Hughson.

As she grew older, she was lovingly cared for by her husband Jack until his unexpected death just 2 years ago. The Manning family thanks the great staff at Bishop Noa and UPHS Hospice for making the end of Jeanette's long life enjoyable.

On Wednesday November 23, 2022 visitation will begin at noon in the vestibule of St. Joseph/St. Patrick Church in Escanaba with Mass of Christian Burial to follow at 1:00 p.m. with Father Timothy Ferguson officiating.  An indoor committal service at Holy Cross Cemetery Chapel in Escanaba will be held at the conclusion of the services. Donations may be directed to either United Way of Delta County or St. Joseph/St. Patrick Parish.

To send flowers to the family or plant a tree in memory of Jeanette M. Manning, please visit our floral store. 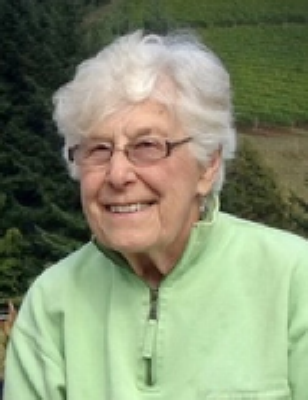